skip at the FES in Berlin. Friedrich Ebert Stiftung Conference: Along the learning curve 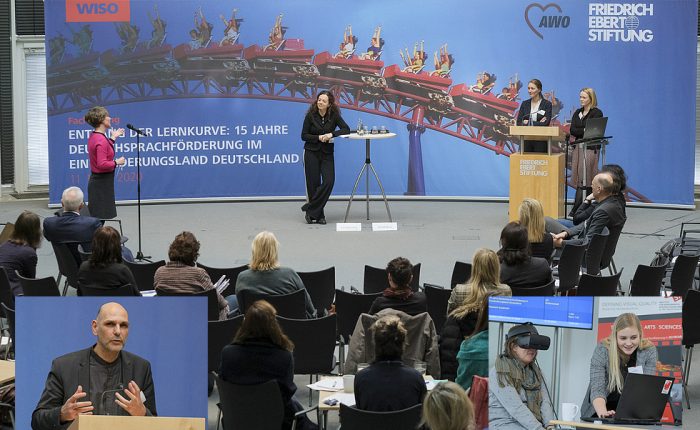 More flexibility, more individuality and more research are needed: this is the conclusion of a conference of the FES and AWO.

Since the adoption of the Immigration Act in 2005, as AWO board member Brigitte Döcker introduced in the conference, 2,3 million people have attended integration courses. These form the cornerstone of the overall language programme formulated by the federal government. The Federal Office for Migration and Migration and Refugees (BAMF) - in accordance with the diversity of the the target group - is striving for course formats that are as customised as possible. However, this hardly reflected in the implementation of the courses. 73 percent of the participants attended the integration courses. "But a But a Romanian doctor," said Döcker, "needs a different approach than a Romanian worker from the meat processing industry."

The target groups of the courses have become increasingly complex and heterogeneous in terms of their learning biographies and will certainly continue to do so, due to the recently enacted Specialised Labour Immigration Act, for example. One task that needs to be addressed is to develop appropriate learning for individual groups. Up to now, this has largely been discussed as an administrative task. But it is above all the the pedagogical and methodological core business of the courses, said Döcker. In particular, more research is needed for this.

Language should not only be learned, but also practised

In addition, the people concerned must be much more involved, she demanded: "The use of the language has to happen in everyday life. Only practice brings success. We have to create opportunities to speak: In the workplace, in the neighbourhood. "This is an important task for the future.

He took part in the integration courses, which were very focused on language. "That was very important for me. But I wanted more contact with the local people," Saad said. What would really have increased his progress should have been activities and connection to society - that was something the courses should also provide. I I myself was lucky that I came to a place where people approached me," said Saad. The mayor of the municipality explained the political system in Germany to him. At the first friendly demonstration of his life, he listened to a speech by the then Minister President Torsten Albig. "Until then, politics was not a topic for for me," Saad said. "After all, I came from a dictatorship. But now I was enthusiastic.

On the one hand, the situation was made more difficult for him by the waiting time - only six months after his arrival and his official recognition as a refugee by the BAMF. In addition, there were no faster courses for people who wanted to study."I would have liked to do the courses in six instead of twelve months." Moreover, from level B2 onwards, the courses were no longer financed by the Job Centre. After waiting another six months, a foundation finally paid for the additional intensive course so that he could apply for a place at university.

"You would have to orientate the question of how people can and want to learn." Saad recommended. If someone's family is still at war, it's hard for them to concentrate on a new language because they are so worried. And a 60-year-old no longer needs language certificates, but must be able to orientate himself in everyday life. For him, however, the certificates were urgently needed.

More research and evaluation of learning opportunities is needed

The other end of the learning spectrum, i.e. course participants with little or no learning experience at all, were brought back into focus later in the conference. Christoph Schroeder from the University of Potsdam pointed out that it is these persons in particular who failed the integration courses in their current conception - in some cases several times. More research is urgently needed here and taking a look at Scandinavia, but also Canada, where a longer tradition on these adults who are "unaccustomed to learning" exists, could be worthwhile here.

The commentary by Dietrich Thränhardt, professor emeritus at the University of Münster, on the interim report of the evaluation of integration courses currently being conducted by the BAMF Research Centre, once again showed some weaknesses in the current implementation modalities of the integration courses. "After all," quoted Thränhardt the report succinctly: "Refugees who have attended an integration course attest to better German language skills than those who do not.

Thränhardt did, however, find some of the report's findings questionable. For example, the report considers language support programmes outside of the integration courses, which exist in most of the federal states and in some cases also in the municipalities, as competition - "a very narrow perspective", Thränhardt criticised, "not an overall view". And, according to the BAMF's own evaluation, very few participants in the courses are aware of counselling services, although nearly all providers had expressed a great need for counselling support.

In the evaluation of the examination results of the various courses show, that childcare during course times is urgently needed. This is the only way to ensure that women with children take part in the courses and then successfully complete the courses. It is also "of importance" that accommodation in private homes would be much better for language development than in shared accommodation. "Being in a permanent situation and not staying in transition," Thränhardt said, "strongly promotes the learning experience".

He was "really shocked" by the fragmentation of the lecturers' work: only 24 per cent of all courses were taught by the same lecturer. This was a central finding of the interim report: "This means that no relationship of trust and communication can develop. The BAMF must address this finding.

With regard to orientation courses which are part of the integration course programme, Thränhardt said there was a "lack of interest on the part of the participants". This is because many of the questions in the final test were unsuitable: Which two parties merged in 2007 to form the left-wing party had nothing to do with the everyday lives of the participants. In addition, the answers to the test questions, which are always the same, are accessible questions were available online, and the preparation of the participants therefore preparation is mainly memorisation. "So you learn that you get further in Germany if you memorise things that are given to you," says Thränhardt. "That is not what the courses should be about." He called for a critical discussion of these results in public.

In the joint discussion between Saad, Thränhardt and the audience, various possible solutions were suggested: Continuous counselling by one person throughout the asylum to create a situation of communication and trust. Visits to the town hall or the state parliament to discuss on the spot what coalitions and majorities are. Education about legal advice or the function of the judiciary and police. Mediating honorary positions. Information, how and where people can have their education recognised. Use mother tongue. Faster start of courses. Smaller group sizes. Exchange evenings, for example, about own values, such as those AWO in Bielefeld has developed and successfully implemented - so that it is no longer the primary focus on the test at the end of the course, but on the conversation itself. "We act as if refugees were people who don't know the basic principles of how to with each other," said a participant from the audience. "But they don't have to learn how to eat with a knife and fork - it has to be about practical forms of political education and social participation.

Another criticism that was often raised was the precarious financial situation of teachers, who are usually freelancers. The Federal Ministry of the Interior sets the minimum fee - but if you convert that, including preparation and travel time, you are well below the legal minimum wage, criticised a representative of the Union for Education and Science (GEW) criticised. "Improving the quality of the courses must go hand in hand with quality improvement of the teachers' employment conditions. go hand in hand."

A rural perspective on German language promotion is often missing

The second part of the conference focused on language courses in rural areas on which there has been hardly any research so far - and even in the audience after a brief show of hands, it was evident that the urban perspective on German language is more present . The two scientists Hanne Schneider and Jana Scheible then presented the preliminary results of the of the FES study "Challenges of German Language German language support in rural areas" (working title). FES intends to make the final results available at the end of April.

Schneider and Scheible used an example of Baden-Württemberg and Saxony to give an insight into the impact of the federal language programme - and at the same time recommendations on how to remedy the shortcomings. The range of of different course formats, according to the researchers, is very limited in the in rural areas, and there are often few participants. It is therefore necessary to establish small groups and to make the number of hours more flexible. Lecturers also need better conditions: Three hours of unpaid travel time to teach a course is not worth it, of course.

It is also evident in rural areas that childcare is a problem - it needs to be expanded, the researchers say. In addition, there is a need not only for refugee parents to have part-time and evening courses, but also for seasonal and shift workers, many of them migrants from the EU. This must be coordinated in the long term, and the "funding jungle" between the federal and state be dissolved. "Rural areas should be considered as the norm," they said "and not remain an exception".

Suggestions came also from the audience: learning cafés with digital tools could be created. Lecturers could visit participants via mobile consultation service: "The course instructor comes to the village like the egg fellow," they said.

Learning opportunities of the future

A prospect of what additional offers there might be for courses in rural regions, but also in urban areas, was offered by Christopher Wickenden from the Fresenius University of Applied Sciences Cologne which focuses on the potentials of artificial intelligence and virtual reality (VR) in German language support. Using VR glasses, learners can watch real 360° films about everyday situations: About visits to the pharmacy, joining a football club, registering at a school or a police check. "These are situations for which you have to build trust," Wickenden said.

Although the effort to produce the films is quite high, they are then Although the effort to produce these films is quite high, they are then online and therefore available and can be accessed at any time. The learners can change situations in a 3-D room and the screen writers and actors have to create these accordingly in advance."But it is worth it," Wickenden said:The films meet the expectations of many refugees. 90 per cent of them have a smartphone, so they already have the technology with them. Young men in particular have a high affinity and willingness to get involved with such offers.

Towards the end of the conference Karamba Diaby, a member of the SPD Bundestag, closed the circle in the discussion with Tarek Saad, the first speaker at the conference, who fled Syria in 2014. "When I came to Germany 34 years ago, I didn't speak a single word of German," said the the doctor of chemistry and geoecology. "The courses alone were not enough for me. Learning German always means coming into contact with people, that must not be missing."